Occurrence:
Can be seen throughout the year
Habitat:
In the summer at larger lakes, in the winter anywhere near water
Conservation status:
Least concern

The black-headed gull is the most common gull in Bavaria, Germany, and even in the whole of Europe. It can be found near rivers and lakes all year round. For some people, the black-headed gull awakens a longing for the sea.
In the summer, it breeds in colonies of several thousand birds on the large Bavarian lakes. In the winter the black-headed gulls flock to our cities, where they perch on the railings along the rivers.
Their scientific species name Chroicocephalus ridibundus means “the abundantly laughing one”, because it is composed of the Latin words ridere = laugh and abundare = abundant.

The black-headed gull is an omnivore and feeds on everything that gets into its beak. Its favourite food is earthworms. It uses a trick to lure them out of the ground: it taps rapidly on a suitable spot – the worm probably thinks it’s starting to rain and comes to the surface – “wham!” it grabs the worm by the scruff of the neck and eats it.

The black-headed gull changes its plumage twice a year. In the winter it wears a winter plumage, almost completely grey-white. In the spring it moults into the summer plumage and its head turns chocolate brown.

On the surface, black-headed gulls  lead an ordinary bird life between the lakes and the city. However, appearances can be deceptive. Black-headed gulls are full of surprises, as you will discover in the course of this project.

One thing we will let on: black-headed gulls coming from Eastern Europe spend the winter in our Bavarian cities. In the first winter (after birth) young birds do not yet have a fully coloured plumage and still have a few brownish feathers from their days in the nest. Only by the age of one year do they become fully coloured. 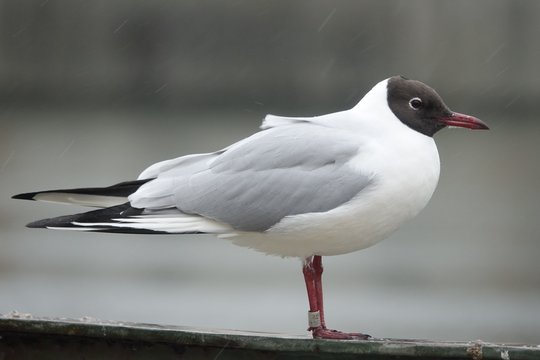 From the end of March, black-headed gulls wear a chocolate-brown hood with white arcs behind the eyes. Towards the end of August, black-headed gulls moult into winter plumage = plain plumage, which means they undergo a complete change of plumage. The hood disappears completely in the winter and all that remains is a dark spot behind the eyes, or even sometimes a darker area around the eye. From mid-February onwards, they once again moult into their summer plumage.